OP ward in railway hospital closed as matron is infected

OP ward in railway hospital closed as matron is infected 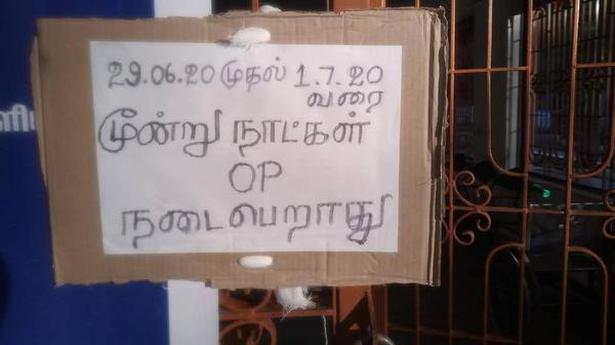 The outpatient ward in Madurai Railway Hospital was closed on Monday after a matron had been infected with COVID-19.

According to railway sources, the OP ward was functioning on the ground floor of the hospital, while the first floor was recently converted into a COVID-19 ward where over 30 patients had been admitted.

A board was put up on the premises stating that the OP ward would remain closed for three days from Monday.

The special ward started functioning from last Wednesday where Madurai city police personnel and railway personnel have been admitted.

“Our fear that patients among railway employees, pensioners and their family members, who are admitted to the inpatient ward and the outpatient ward would be infected, if the special ward was set up close to these wards, has come true,” said Dakshin Railway Employees’ Union divisional secretary R. Sankaranarayanan.

The hospital was the only big medical facility for 8,000 railway employees and 4,000 pensioners in Madurai Railway Division. “Now, we will not be able to use the hospital,” he said.

Several beds were available at the Engineering Training Institute Hostel at Arasaradi railway ground, he said adding that COVID-19 ward could be shifted there.

However, a railway official said the State government had taken over the hospital as it has run out of beds at the Government Rajaji Hospital. “Even railway staff who are infected are getting treatment here,” he added.

You have reached your limit for free articles this month.

Find mobile-friendly version of articles from the day’s newspaper in one easy-to-read list.

Enjoy reading as many articles as you wish without any limitations.

A select list of articles that match your interests and tastes.

Move smoothly between articles as our pages load instantly.

A one-stop-shop for seeing the latest updates, and managing your preferences.

We brief you on the latest and most important developments, three times a day.

Not convinced? Know why you should pay for news.

*Our Digital Subscription plans do not currently include the e-paper ,crossword, iPhone, iPad mobile applications and print. Our plans enhance your reading experience.

A letter from the Editor

Your support for our journalism is invaluable. It’s a support for truth and fairness in journalism. It has helped us keep apace with events and happenings.

The Hindu has always stood for journalism that is in the public interest. At this difficult time, it becomes even more important that we have access to information that has a bearing on our health and well-being, our lives, and livelihoods. As a subscriber, you are not only a beneficiary of our work but also its enabler.

We also reiterate here the promise that our team of reporters, copy editors, fact-checkers, designers, and photographers will deliver quality journalism that stays away from vested interest and political propaganda.

Tamil Nadu Govt Issues SOP For Places of Worship, Says No to Sprinkling of Holy Water